"Change is the new normal"? Maybe. "Change is the new constant"? Not necessarily. In his Sept. 23 keynote at Global Directions 2013 in Washington, D.C., inventor, author and futurologist Ray Kurzweil argued that nothing is constant when it comes to the changes occurring in IT.

SearchCIO Executive Editor Linda Tucci attended Kurzweil's presentation, and came away with the impression that "the world is changing more and more rapidly, fueled by information technology." In Tucci's column on the keynote, she explained Kurzweil's views on the expansion of technology and the importance of looking at growth exponentially, rather than linearly. 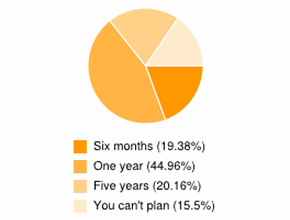 To provide a historical view, Kurzweil presented visuals depicting the consistent, exponential growth of IT in recent times, which avoided dips even during wartime, the Depression and the recent Great Recession, indicating that IT progress is largely fueled by human curiosity and doesn't waver in times of economic hardship. Kurzweil suggested that just as inventors anticipate what the world will be like when their invention is finished, IT and business leaders also must prepare for the next big advance in the role of IT.

To find out what SearchCIO readers felt about thinking exponentially and planning for the future of IT, we asked, "How far in the future can you plan out IT, given how fast technology changes?" Readers could select a timeframe between six months and five years.

Twenty percent of our respondents felt that anywhere between six and 12 months is a suitable timeframe for future IT planning, noting that the technology landscape changes at a rapid rate:

The most common response to our IT planning question was "one year." Forty-four percent of readers took that stance, but not without some hesitations:

Enterprise guide for the future of mobility

When it comes to hot-ticket investments like desktop computers and company laptops, 20% of readers felt a five-year planning was most appropriate. One respondent suggested planning any shorter than seven years in advance could force CIOs and IT leaders to become firefighters in their organization:

Not all readers felt that IT could be planned to a tee. Sixteen percent responded, "You can't plan!" in our story poll. Said one:

Planning for IT is becoming increasingly difficult as innovation grows exponentially. Here's what readers had to say on that subject:

What do you think? Should CIOs create an IT planning timeline, or is it a waste of resources? Sound off in the comment section below.

Dig Deeper on IT project management and portfolio management

ebuckman - 8 Dec 2013 5:45 PM
It is said that, "if you failed to plan, you plan to fail". IT requires planning. There is the need to carry out capacity planning of IT infrastructure each year based on annual objective of the business. Today's business is growing, becoming heterogeneously complex. IT might not be able to provide effective support if they failed to plan. Planning does not necessarily means hardware must be changed on yearly bases. Change of infrastructure and IT solution could only occur if based on the objective of the business, current IT infrastructure cannot provide effective support, then it would be wise to change. However, it is recommended for IT infrastructure / PC refresh be planned to take place in every four (4) years. IT Planning is critical.