Browse Sections
This content is part of the Essential Guide: An IT security strategy guide for CIOs
Related Photo Stories
7/8 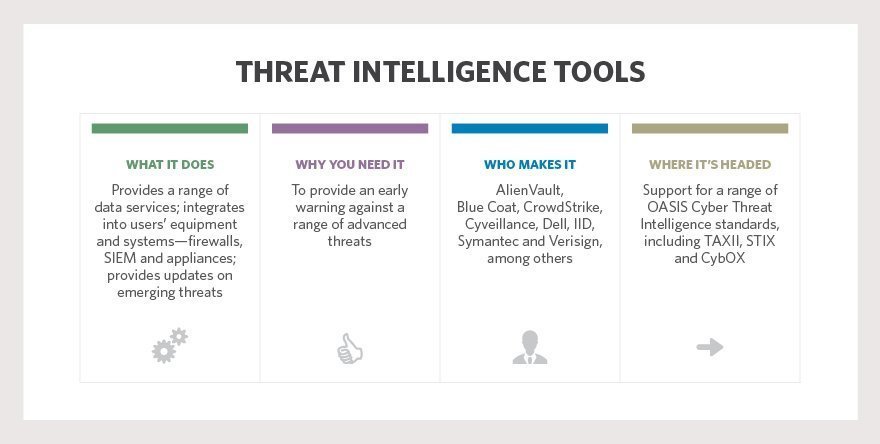 Threat, compliance and risk networks provide a range of data services. Right now, they're mostly based on particular vendors' boxes and appliances. So, the architecture is essentially: If you've got our appliance in your network, we are gathering information from that appliance and using that information, suitably anonymized, to inform you of a threat. That's really what's going on.

There are two really interesting things that are happening here with the threat, compliance and risk networks. The first one is there's a series of specs that have been developed over the past couple of years that ... in June [2015 were] handed over to OASIS, which just launched the CTI Committee, which I think is Cyber Threat Intelligence, and these standards are TAXII, STIX and CybOX. What they do is allow organizations to safely share suitably anonymized information about threats so that you can benefit from what's going on with your neighbors.

The reason this can be valuable is if you know that companies in your vertical industry are being targeted with an attack of a certain type, you can actually protect against that. We start moving from just responsive to actually being proactive and anticipatory, so that you can protect against something before it happens, not while it's happening.

So, if you're in the financial services industry and you haven't heard of this before, go look it up. Very interesting stuff. Because the financial services industry has, of course, pioneered clearinghouses, as you know very well, so it might be interesting to see where they're headed. Other vertical industries could conceivably do something like that.