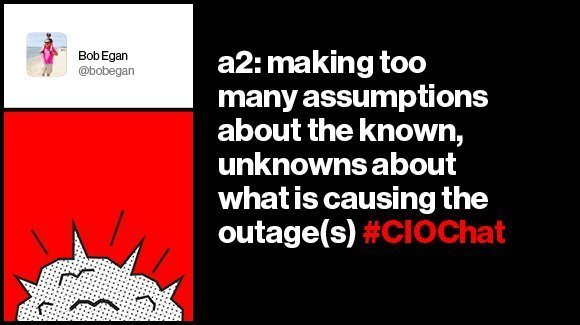 You know what they say about those who assume.

Bob Egan, CEO and founder of The Sepharim Group, a mobile industry research and enterprise consulting firm, warns DR strategists: Don't make assumptions about known or unknown causes of a service interruption, because doing so could cost you.

There is a long list of potential reasons for outages, spanning from basic human error to technical glitches, to poor coding proofreads and environmental crises. During SearchCIO's Twitter discussion on disaster recovery plan testing, Egan suggested that organizations can't improve DR testing if they're not reaching evidence-based conclusions about the causes of service interruptions. For instance, just because a hacker interrupted your servers last month, it doesn't mean that a hacker is the cause for this month's interruption.

Fellow tweet jam participants Andi Mann and Edward Haletky (aka Texiwill) also weighed in on the perils of skipping tests and analysis that can support -- or dispel -- assumptions:

@searchCIO @AndiMann expecting it to work the first time, and not testing constantly

@AndiMann @searchCIO #ciochat and not having a good recovery process for test failure! Continual testing is a must

Tests will not run smoothly 100% of the time. It's important that organizations accurately track the who, what, when, where and why of service interruptions -- and then plan time to retest.