Most people attribute the beginning of the "consumerization" of IT to the rise of the smartphone. This would track roughly to the year 2000 when Ericsson Inc. introduced the R380 mobile phone, most often credited with the first use of the term "smartphone." According to a 2012 Intel Corp. study, "Insights on the Current State of BYOD," it was, after all, the smartphone that began the bring your own device (BYOD) phenomenon that is often used synonymously with the consumerization of IT. The Intel study provides us with further perspective as it asserts that "… consumerization goes way beyond devices. It's about creating a seamless at-home and at-work computing experience to improve the way we work."

Given this understanding, I would suggest that consumerization finds its roots in a technology much, much, much older than the year 2000. Consider the human thumb: "Unlike other fingers, [it] is opposable, in that it is the only digit on the human hand which is able to oppose or turn back against the other four fingers, and thus enables the hand to refine its grip to hold objects which it would be unable to do otherwise. The opposable thumb has helped the human species develop more accurate fine motor skills. It is also thought to have directly led to the development of tools." [Source: wikipedia.org, "thumb."]

The evolution of the fully opposable thumb is the result of evolution, generally traced back to Homo erectus, around 1 million years ago.

To put this further into perspective (in case you may not agree with characterizing your thumb as a "tool"), here is a list of the "20 Most Important Tools Ever" compiled by Forbes.com in 2006. I have taken the liberty of sorting the list by the age of each tool.

Notice anything significant about this list? Consider the following:

Much of what we hear about consumerization and BYOD emphasizes the obstacles that CIOs must overcome on behalf of their enterprise while controlling the "foreign invaders." A Forrester survey of more than 300 IT decision makers identified 13 mobile device management challenges cited by at least 20% of the respondents. Here are the top four: 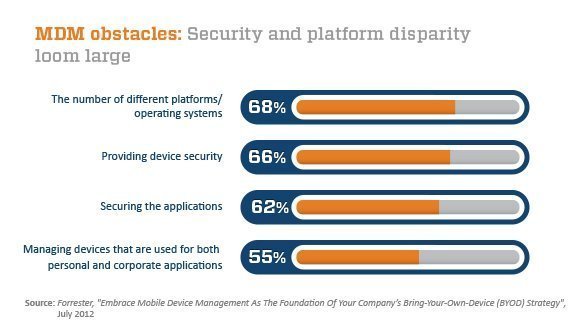 As a former CIO, I can personally relate to the challenges of adopting and institutionalizing new technologies while ensuring their safe and sound use. The four challenges described above are certainly real; some clearly come with considerable "hair" (geek speak for complexity).

Based upon roads traveled so far, here are some important questions for your thought and continued consideration:

Please don't misunderstand. I am not saying that the challenges posed by consumerization are not real, because they are. I would like to encourage you to recognize that dealing with obstacles and overcoming challenges are your table stakes. Don't earn yourself the title of Chief Impediment Officer (CIO). Instead, focus on the opportunity value of what some call a sea change and what I call the natural evolution of the complex relationship between people and their machines.

Here are a few opportunities to explore along your consumerization journey:

Whether you believe that consumerization is, in fact, a sea change or a somewhat less dramatic next routine step in our multi-million-year evolution, the conclusion must be the same: Adapt, survive and thrive, or become the Chief Impediment Officer and start dusting off your resume.