Our cover story in October's CIO Decision e-zine came with something of a Shakespearean admonishment: Know thy users -- especially those who use the cloud. And, yes, if anyone could have imagined a distant future in which information worldwide is accessed via a "floating" structure, it would have been the Bard, he who penned the line, "There are more things in heaven and earth, Horatio/Than are dreamt of in your philosophy." 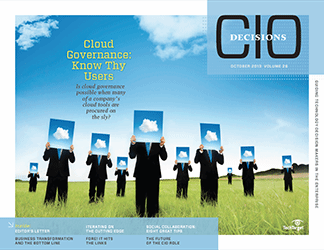 The cloud certainly opens up vast new IT opportunities, but also presents some striking governance challenges. It's a theme that runs through the October issue, as our CIO interviewees grappled with such technology hang-ups as ERP deployment, social collaboration and even the future of the CIO role. The technology leadership quotes we've culled shine a light on these and myriad other issues IT executives face -- and also offer some advice on how to avoid a technology tragedy.

"If at any point in time, if there were even one of our executives that pushed against the project or what the project was to accomplish -- luckily that did not happen -- we would have seen catastrophic issues in that area of the company."
--John Bowden, CIO, Lifetime Products Inc.

Read how Bowden got stakeholder buy-in for his ERP deployment.

"On the technology side, you can afford a little more innovation, a little more risk, so to speak. Because you're constantly innovating, you're constantly pushing the envelope and testing products and testing yourself against those limits. Engineers are more willing to do that, take corrective action, iterate through and move forward." --Bill Miller, CIO, Broadcom Corp.

Find out how Miller keeps his entire staff on the cutting edge of technology.

"We're trying to create a culture where, whether it's an hourly-paid associate on the food and beverage line or the CIO or [chief marketing officer] or CEO, it's everybody's job to come up with new ideas on how we can make things better."
--Tom LaPlante, CIO, TopGolf

What other innovations has LaPlante brought to TopGolf?

"What we are experiencing today, I truly don't believe we've ever had anything quite like it. There aren't that many people who really understand the individual technologies; to manage to have them integrated is extremely complicated."
--Jerry Luftman, former CIO, professor emeritus of the Stevens Institute of Technology, managing director of the Global Institute for IT Management

What do Luftman's observations mean for the future of the CIO role?

"We've all been taught by McDonald's how to order McDonald's -- pick a number. [Users] will get used to it if it works; they'll start to understand the key functions they need to perform, how they think it should work and eventually say, 'I just hit this button and the magic happens.'"
--Ian Clayton, senior vice president of operations, G2G3

Learn how Clayton aced cloud computing governance in his organization.

"When we bring that to an internal private cloud perspective, if we can give users that same level of choice and present them with [a few options], that's probably going to be good enough. They feel like they've got a choice, but they're not getting into the deep, deep weeds."
--Chris Ward, CTO, GreenPages Technology Solutions

What cloud choices did Ward present his customers?