Read part one of this story, which looks at technology priorities and the IT master plan for 2014.

Shortly after Y2K projects ended in 2001, dealing with mobility on a grand scale was not a very high priority for IT shops. Most turned their attention to consolidating the sprawling, costly mess they had created during the Web boom of the '90s. Ultimately, that drive fueled a cluster of transformative changes, such as networked storage and actual disaster recovery planning.

Most importantly, it led to the rapid adoption of virtualization technology, a movement that will continue unabated into 2014, according to TechTarget's 2014 IT Priorities Survey. Fully 54% of North American respondents listed server virtualization as "on the agenda" for 2014, the single most popular enterprise technology project in the survey again this year. 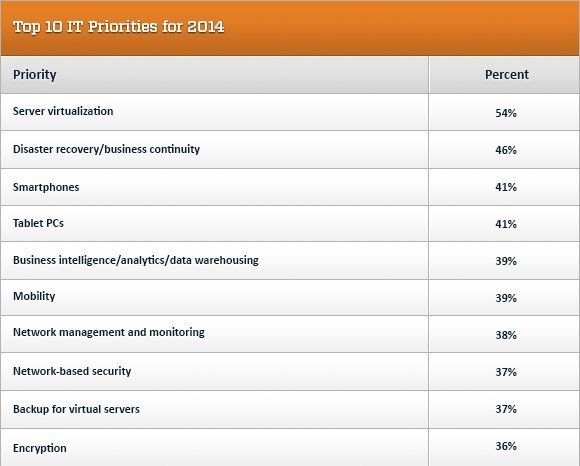 Other recent favorites -- disaster recovery, business intelligence and network-based security -- again made the top 10 list and form an IT blueprint for the year ahead. Last year, though, projects related to mobility clearly began to get traction and, this year, three of the top six projects were related to mobility, smartphones and tablet PCs. Mobility is here to stay as a top IT priority at many companies, with 39% citing some kind of broad mobility initiative for 2014.

Along with those projects, IT is building the management structure to make smartphones and tablets safe for enterprise computing. This year, 34% cited mobile device management or mobile endpoint security projects, in line with last year's results. Mobile security, in general, is a focus for 32% of respondents. That puts it on a par with data center consolidation -- in other words, a major focus.

Putting those mobile devices to use is also a focus, with mobile applications a project focus in 2014 for 35% of respondents.

Networking changes are beginning to show up as well, with 24% listing some form of network virtualization as a 2014 priority.

Essential Guide on IT salaries and careers

Infographic: Salaries, jobs and the mood in IT

And they are using cloud infrastructure in surprising quantities. On the server front, respondents using IaaS services estimate that they will put 28% of their server and storage capacity in the cloud.

Back in the data center proper, the normal upgrade cycles continue. Windows Server 2012 upgrades will be on the agenda at 34% of shops. When it comes to the desktop, the big turn away from Windows XP is going in two directions. Windows 7 upgrades are going on at 34% of shops, but Windows 8 also got the nod at 19%. There is little duplication between these two groups: 24% of Windows 7 migrators are also doing Windows 8, but only 12% of Windows 8 users are also doing Windows 7. In all, 49% of shops are going to one or another of Microsoft's post-XP operating systems.

This article was based on TechTarget's annual survey of IT priorities sent to members. This year, 5,241 people responded to the survey from around the world, including 1,368 in the U.S. and Canada. Unless otherwise noted, results cited in this article are for U.S. and Canada respondents.