This content is part of the Essential Guide: Careers in information technology: A CIO guide to getting ahead in IT

Driven by the push to get value out of data and by the transfer of infrastructure, applications and data to the cloud, IT managers believe their profession is on the cusp of significant change. Whether that change is for the good of their IT career path remains to be seen.

"Cloud is making a huge difference to IT careers," said David Girard, one of the 277 IT managers who participated in our IT Salary and Careers Survey, which surveyed 1,711 IT professionals in North America.

The exciting part of our focus next year is the move away from keeping the lights on to delivering reports and data upon request and having a one-stop shop for their data needs.

"To a certain extent, senior executives devalue us now and view our services as commodity -- that we are button-pushers," said Girard, IT manager at an educational publisher with 5,000-plus employees. "On the flip side, many see the real value in governance and controls around those easy-to-push buttons. They are aware of the mess we could be in and how fast we can get there with unchecked cloud services."

IT managers, such as Girard, who took the survey, suggested that on-demand cloud models are making it more challenging for IT professionals to meet the traditional IT tenets that have helped them move up in the IT ranks. The top three means by which an IT manager's performance is measured by the business are: ensuring reliability of IT services, completing projects on time, and meeting productivity goals, according to the survey.

Girard said those IT measures still hold true, but cloud computing gives them a whole new urgency. "There is very much a, 'I don't care one way or another; do it now' attitude [coming from the business]," he said.

Unlike in the past, however, the business understands enough about technology that "now" doesn't always mean perfect.  "What is really refreshing is [that] those [business users] asking for it now take accountability in getting something done faster, and are saying more often that we [in IT] do have time to fix it later or revisit," he said, adding that his colleague has a sign above his desk to that effect: "There's never time to do it right, but there's always time to do it over."

The factors behind job satisfaction, changes in IT career path

The "now factor" is also causing IT delivery to shift to self-service models.  Ken Yawfimetz's focus moving into 2014 will be on creating "Data as a Service" in easily digestible data chunks. The IT department will do all the data crunching and data analytics -- pulling that responsibility off employees' plates -- and will create a self-service portal for employees to access and manipulate the data they need.

"The exciting part of our focus next year is the move away from keeping the lights on to delivering reports and data upon request and having a one-stop shop for their data needs," said Yawfimetz, who is an IT manager with a large government agency. For Yawfimetz,  this "ability to add value" in the form of self-service analytics that in turn boosts employee productivity and the speed with which they serve customers motivates him to want to stay in his current job. 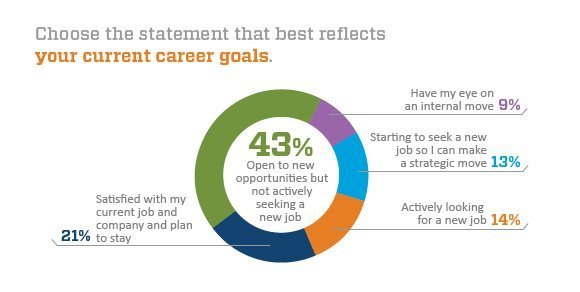 What else constitutes job satisfaction? Being given challenges that allow him to innovate and streamline business processes, he said. An environment in which innovation is encouraged was the top reason IT managers ranked their mood about their organization as positive. Conversely, limited career advancement was cited as the biggest mood downer, followed by ineffective management and continued IT budget cuts.

The majority of the IT managers who took the survey have been in the IT field for one to five years. And those that have been in their current position for less than a year said they took a new job in 2013 because they wanted more money, were laid off, or they wanted a new challenge.

Ram Karumuri, who is a senior manager of IT audits, said his IT career path has been a happy one because he came from the business side, and then entered the IT field.  "I started out in banking business operations, then gained core banking systems knowledge as a project manager, so I understand the business point of view versus just going by the book to make a recommendation on how to improve something."

The salary sum of things

A salary trend being driven by a lack of IT talent is becoming more prevalent, according to Girard, who said he is seeing those with less experience making the same salary as more seasoned professionals.

"People are being rewarded not necessarily based on what they can or can't do, but purely because companies are struggling to fill empty seats. They just want a warm body," he said.

blade01uk - 2 Jan 2014 11:57 AM
I have been told I could be made redundant once the company move to cloud. Pretty hard to take. Getting all the systems in place that will actually be the cause of me losing my job.