This content is part of the Essential Guide: Careers in information technology: A CIO guide to getting ahead in IT
By

They're in the money -- and they expect to stay that way. A majority of senior IT executives responding to the 2013 TechTarget IT Salary and Careers Survey reported an overall increase in compensation in 2013 compared to the previous year and believe history will repeat itself in 2014.

I value myself as a key individual able to deliver unique knowledge and expertise to our company, and financial rewards are just one way the company shows its appreciation.

In all, 57% of the 464 senior IT leaders represented in the survey saw their total compensation go up in 2013 (30% reported no change; 14% claimed cuts). The average reported increase in base salary was 5.9%. Additionally, 43% of these executives reported receiving a bonus. The average bonus was nearly $31,500 for top ranking IT leaders.

Looking ahead to 2014, 59% percent of senior IT leaders who took our survey expect another increase in compensation; 32% expect no change, while 9% anticipate a loss. Senior IT executives were defined as CIOs, chief technology officers [CTOs], executive vice presidents and directors of IT/MIS/IS.

Among the IT executives who saw compensation increases, several who spoke to SearchCIO in follow-up interviews said the pay raises were tied to the growth and financial health of their companies, another sign of the economic recovery.

In the case of one executive at a consulting firm who did not receive a financial boost, the reason given was that the compensation package he had negotiated continued to serve him well. He further noted that his compensation was pegged to go up in 2014  -- likely in the form of increased stock ownership in the company.

Although the survey did not ask specifically about pay raises for their staffs, the senior IT leaders interviewed for this story said they worked hard this year to reward their own employees either through raises or finding ways to help advance their careers.

Daniel Salama, CIO at MCNA Dental based in Fort Lauderdale, Fla., is one of the 57% who received an increase in compensation in 2013. He's also among the majority of people who expects a gain in 2014.  His compensation prospects are tied to the financial health of the company, he said. MCNA is experiencing rapid growth and the solutions his IT organization develops and delivers -- in accordance with clearly defined project goals -- is integral to that growth. 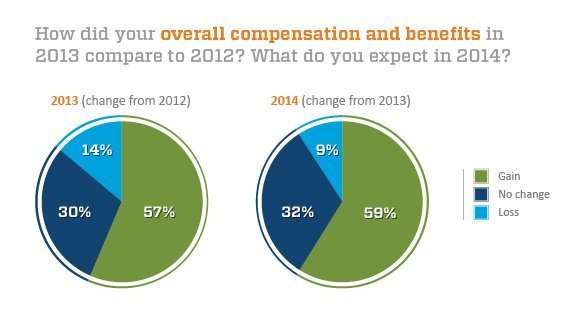 "I value myself as a key individual able to deliver unique knowledge and expertise to our company, and financial rewards are just one way the company shows its appreciation," Salama said.

Among the 30% of senior IT leaders who saw no change in compensation is the CIO at a regional IT consulting practice in the Northeast, who requested anonymity. Like dental insurance firm MCNA, his company is "doing great and growing rapidly," and like Salama he is expected to enable that growth with IT. Nonetheless, he was untroubled by not getting a compensation increase in 2013.

"Financial rewards are nice, but at this point in my career I feel comfortable with the package I negotiated, and I'm much more concerned about being in the right job," he said.

Moreover, he expects an increase next year, which will likely be along the lines of stock options that add to his corporate ownership, he said.

Shivani Verma, provincial director of client services and service management at Heath Shared Services BC (HSSBC) in Vancouver, British Columbia, also didn't experience a boost in pay in 2013. Being employed in the public sector where tight budget constraints are the norm, Verma said she doesn't expect a regular major increase in compensation.

Her expectation for 2014 is only for a cost-of-living increase. Money isn't the only factor contributing to her work satisfaction.

"I can bring change in the healthcare delivery to my province and to the people who live here," Verma said. "The ability to make that kind of change motivates me and everyone I work with."

When economic times are good or improving -- and even when they're not -- senior IT leaders who communicated with SearchCIO about the survey results said they strive to find ways to reward their own employees. Sometimes this means a salary increase; sometimes it means providing opportunities.

The consulting practice CIO said the way his company is growing, there is ample opportunity for IT advancement, which brings with it additional compensation.

Read more from our 2013 IT Salary and Career series

Job satisfaction among senior IT leaders tied to innovation, growth

"We try to build an environment that is fun and exciting, and where individuals have ownership of their projects," he said. "We also pay more out in spot bonuses, so we're not constrained by high base salaries."

At HSSBC, where money is tighter, Verma encourages employees to develop new skills.  "There is room to grow and those opportunities define the monetary rewards," she said.

For IT team members at MCNA, Salama has developed performance incentive programs to keep employees "motivated and on their toes at the same time." He said the programs include bonuses throughout the year and one or more salary revisions.

There are non-monetary rewards CIOs can provide their staffs too, he said. When opportunities for promotion are not available, for example, he said he looks for potential horizontal moves that will help employees advance their careers. He also works at creating a positive workplace culture.

"I always work hand in hand with my staff to develop extracurricular activities that promote team-building, while allowing them to disconnect from work and enjoy each other as colleagues and friends," Salama said.

Dig Deeper on IT staff development and retention