This content is part of the Essential Guide: IT career survey 2013: Employee satisfaction, executive compensation

What is the potential earning power of senior IT executives? The answer, of course, is, "It depends." According to our 2013 TechTarget IT Salary and Careers Survey, some of the most important factors that set compensation levels are company revenue, company size, length of career and, to a lesser degree, industry.

One clear conclusion: Senior IT executives looking for higher pay should consider moving to a bigger company.

Similar to last year's respondents, the IT Salary Survey 2013's pool of 464 senior IT executive respondents revealed that pay for the people in charge of IT operations can differ substantially. Total compensation for our 2013 group ranged from $30,000 for the lowest earners to almost $1.5 million for the highest earner. Senior IT executives were defined as CIOs, chief technology officers, executive vice presidents, and directors of IT, MIS and IS.

What separates the high earners from the pack? While their raises as a percentage of salary were only slightly higher in 2013 than those of low earners (6.2% versus 5.4%), more high earners received raises than low earners (58% to 51%).

Time on job, satisfaction, industry make little difference for many

Experience plays a role in senior IT executive pay, at least in one respect. More high earners (43%) have worked in the IT field between 21 years and 30 years than low earners (32%) for the same period. When it comes to the duration of their current positions, however, there is no appreciable difference between the two groups. The majority (54% for both high and low earners) have been in their current position between one and five years. 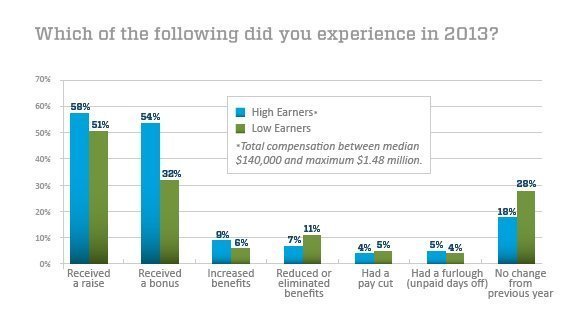 Likewise, job satisfaction was similar between the two groups. A slightly higher number of low earners (26%) plan to stay in their current roles compared with high earners (20%), but an equal number of high and low earners (45% and 46%, respectively) characterize themselves as "open to new opportunities but not actively seeking" a new job.

So what accounts for a twofold difference in salary and four-fold discrepancy in bonus pay between high earners and low earners?

That company size factors heavily into IT leader compensation did not surprise the IT director of a medical school at a large university, whose pay is just above the $140,000 median compensation for high earners but below the average total compensation of $225,301. Pay for his IT group of 10 is set by a salary matrix, with directors at one end of the classification scale and help desk technicians at the other end. Points are awarded for education, certifications and years of experience.

"There is also a subjective component," where hiring managers can make a case for paying a person more, he said. And, yes, the size of the organization does matter. IT directors at the larger schools and departments of the university make more money than those in charge of small organizations or organizations that, unlike the medical school, do not bring in large research grants, he said.

At the university for just a year, he has spent most of his energy implementing ITIL standards in an effort to make IT services consistently reliable. "You can't innovate unless the basic services are up and running," he said. Until that happens, the more strategic research initiatives at the medical school are being handled by a separate informatics group.

Back office versus strategic CIOs

Lily Mok, a vice president at IT consultancy Gartner Inc. whose research focuses on CIOs, said that compensation strategies at organizations are shaped by economics, by the maturity of the industry and by culture, with "financial affordability" ultimately determining pay.

"No matter how much you value people, there is only a certain amount of money you have available to reward and pay them," Mok said. The Stamford, Conn.-based consultancy partners with Mercer on CIO compensation research.

That trend applies to CIOs, resulting in a disjunction in pay between "traditional CIOs with back-office, operational roles" and CIOs who help set business strategy. The latter deliver operational excellence but also take a leadership role outside of IT to impact product development, customer experience or generate revenue in other ways. "These are truly business executives, and their compensation looks like everyone else's in the C-level suite,"Mok said.

Anthony Peters, who leads IT at Burr Pilger Mayer, a 400-person San Francisco-based accounting and consulting firm with six offices in the United States and one in Hong Kong, has experienced the trend firsthand. Based on salary, bonus and profit-sharing, his compensation falls into the high earners' cohort, the firm's employee count notwithstanding. An integral member of the firm's management team, Peters also has an MBA, an attribute the survey did not ask for this year. He is at the table when business strategy is set.

"The expectation is that whatever information comes out of those meetings, I am able to take that information and translate it into technology, in some format," he said. If the company is trying to acquire a new firm or build a new product or take its customer service up a notch, Peter's team creates a solution that either "solves the problem or meets the need."

As for the standard metrics often used to gauge IT's performance -- reliability of services, completing projects on time, cost -- those are "table stakes," Peters said. "That's IT's job, and my firm doesn't measure me on that. They want to know how IT can take them to the next level."

Let us know what you think about the story; email Linda Tucci executive editor, or on Twitter at @ltucci.

mr2happy - 2 Jan 2014 11:47 AM
Years ago, Harvard Business Review had an article addressing Motivational versus Hygiene Factors. According to the article, Recognition is an example of a Motivational Factor; one can be motivated with proper recognition for a job well done. Salary, however, is mostly a Hygiene Factor; money doesn't motivate as much as it satisfies. Take it away by not giving the pay or raise expected, and dissatisfaction sets in. I would not move to a larger company to make more money. I would move to a larger company, or a smaller company, if the recognition and challenges were more appropriate for my career stage and skills. Still, more money would be nice, too. After all, proper hygiene is important.
[-]

cgigerharley - 8 Jan 2014 1:16 PM
No. Not unless they can promise to provide the same environment and care provided to the employees at my current company (Costco Wholesale, Inc.)
[-]