This content is part of the Essential Guide: Careers in information technology: A CIO guide to getting ahead in IT

In yet another sign of the rapid workplace shift from desktop to mobile computing, mobile technology has become a top priority for CIOs and IT leaders, according to results from TechTarget's 2013 IT Salary and Careers Survey.

Twenty percent of the 463 CIOs and IT leaders who participated in the survey pointed to mobile technology as a top-three project area for 2014, sandwiched between security (21%) and disaster recovery/business continuity (19%). At the same time, other core IT responsibilities appear to be losing ground. Only 2% of survey takers selected outsourcing and privacy as primary project areas for 2014.

Based on conversations with IT leaders who participated in the survey, rolling out a bring your own device (BYOD) program across the enterprise continues to be a top to-do for CIOs. The programs range from baby steps to implementing an all-out "have it your way" mobile environment. Their focus dovetails with survey results that indicate operational efficiency (56%) and increased employee productivity (43%) are the top two business values companies are hoping to gain from technology projects in 2014. 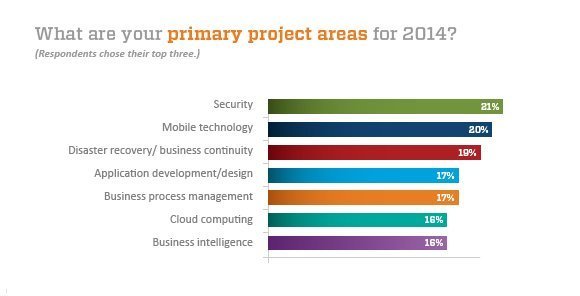 "Right now, our [BYOD program] is in pilot," said an IT leader of a large financial institution who asked to remain anonymous. "So we'll be rolling that out, which really means just phone, and it really means just iPhone." Rather than secure the device, this IT leader's organization opted for the containerization approach for its more-than-60,000 employees. Company data will be stored within its own container on the mobile device, giving the financial institution a chance to wrap it in features such as encryption and authentication and leave personal data alone.

"With the containers, we feel we've got enough of a handle on them to protect card members' data in the event of a lost phone or something else along those lines," he said. That is as long as the device isn't rooted or the original operating system hasn't been swapped out and replaced with an alternative version, he said.

During the second or third quarters of 2014, the BYOD program will make room on the network for Android-based devices as well. But for now, "we're just starting with iPhones," he said, a reality driven by "nontechnical people who like the i-type devices."

Having a BYOD focus in 2014 isn't just for the largest companies. "We no longer call it mobile," said Scott Kushner, chief innovation officer for the midmarket organization Voice Systems Engineering Inc. "We think of it in terms of multidevice."

The telephone and online entertainment company based in Langhorne, Pa. plans to introduce a "have it your way" mobile environment in 2014, which means any data on any device at any time for both internal- and external-facing applications.

While CIOs and IT leaders will continue implementing mobile technology in the new year, other responsibilities will get the cold shoulder. According to TechTarget's survey results, privacy and outsourcing fell to the very bottom of the project list, with only 2% of respondents indicating that either was a priority area for 2014.

Conversations with survey takers indicate that outsourcing and privacy may not stretch across industries and company size the way mobile technology and security do. For Michael Maya, CIO of the city of Wichita in Kansas, privacy isn't a top concern because he's working within the public sector. But for Anthony Peters, director of IT for Burr Pilger Mayer Inc., a financial services firm based in California, data privacy is a major priority.

"For us, it's close to the top [of the list]," Peters said. "I think that one depends on what industry the CIO is coming from."

Outsourcing seemed to follow a similar pattern. For Voice Systems Engineering's Kushner, outsourcing will be a major strategy initiative in 2014.

BYOD in education focuses on productivity

Dell IT becomes a partner to employees with BYOD program

Confront trouble and build the business with BYOD adoption

"There's value in having some portion of the workforce be from outside [the organization]," Kushner said. "It provides flexible capability to … meet the high demand of the business, as well as access to capabilities where it doesn't make sense for us to invest all of the way."

It's also an opportunity to inject new, potentially innovative thinking into the business, he said. Besides, as a midmarket company with a small IT department, growing all of the expertise in-house just isn't a reality, he said.

"I don't know what the right percent is, but we're probably moving to an 80/20 model where 20% of our resource pool is in some form coming from the outside," he said.

Perhaps in this instance, size does matter. The large financial institution referred to at the beginning of this article is insourcing more, according to the IT leader who asked to remain anonymous.

"We're starting to adopt Agile and Scrum more," he said, referring to a strategy that relies on small teams to build products quickly and work iteratively. "By bringing the resources together into rooms, we're more efficient, can get more done with less effort and [can] control our costs."

Additionally, while outsourcing used to be a cost-savings measure, it can also be self-limiting. Those with deep technical skills are promoted up the ranks and into managerial positions and tasks are fragmented and shipped elsewhere to be worked on, eventually creating "gaps in knowledge," he said.

"Long term, businesses can't sustain this because you need that internal knowledge to be built from the ground up and to grow and to make mistakes," he said. "You won't be able to do that by outsourcing and building knowledge outside of your company."

Let us know what you think of the story; email Nicole Laskowski, senior news writer, or follow her on Twitter at @TT_Nicole.