Gender matters when it comes to IT leader and CIO salaries. Data from TechTarget's IT Salary Survey 2012 shows that, in general, female CIOs and IT leaders are making less money than their male peers annually.

Some of the biggest pay gaps are among the most highly educated women, at leadership levels.

Of the 778 senior IT leaders surveyed, 138 female respondents who were either a vice president or CIO, or reported into a C-level executive reported an average salary of $86,294. The salary average for their 631 male peers was $108,741. Moreover, a surprising 60% of female executives reported earning under $89,000 annually, compared to just 40% of their male peers reporting similar salary averages.

Women in IT are not alone when it comes to a gender pay inequality. Disparity in salary averages between genders continues to occur across industries, but it is disproportionately present among higher-level jobs, said Catherine Hill, research director at the American Association of University Women (AAUW), a Washington, D.C.-based women's equity advocacy organization. TechTarget's findings reflect national trends, including those found in the AAUW's 2012 study, The Simple Truth About the Gender Pay Gap.

"Some of the biggest pay gaps are among the most highly educated women, at leadership levels," Hill said. "Often we'll hear there's such great equality in a particular field because there are so many women in senior positions, but when you drill down you often find bigger pay inequality at the top."

According to 2011 US Census Bureau data, about 6% of all women workers earned $100,000 or more, compared to 15% of male workers. Put another way, Hill said, "Women make up about a quarter of workers earning $100,000 or more annually, but make up nearly half of the overall workforce."

The IT Salary Survey 2012 reflected a similar gap in the upper ranks of CIO salaries. While more than 5% of male IT leaders reported salaries of $190,000 or higher, only 1.5% of females matched those earnings. In fact, women earning average salaries higher than $130,000 were a rarity (14%) compared with their male counterparts earning that rate (27.2%).

We reached out to a few of the women who took Tech Target's IT Salary Survey 2012. None were surprised by the salary survey findings, though they weren't all immediately willing to pin the disparity solely on gender. They were willing to discuss the results pertaining to pay inequality anonymously. Their names have been changed, but their job titles and locations are real. 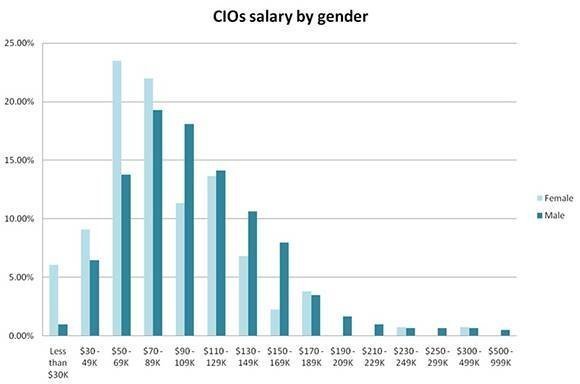 IT leader and CIO salaries by gender.

Each female IT professional maintains a leadership position that puts them in charge of determining salaries of their team members and they are acutely aware of sticking to metrics and keeping pay fair. It is sometimes a different story when it comes to their own pay.

In her current role, "Nancy," vice president of project management at a Seattle digital marketing company, believes she is being fairly compensated, but this wasn't always the case.

"Early on I approached my boss and provided him with examples of work I'd done and ended up getting a promotion as a result of that conversation, which I don't think would've happened otherwise," Nancy said. At first she didn't feel this was a gender issue, but upon further reflection she saw a link.

"It could be that men are more vocal about self-appraisal versus women," Nancy said.

Vocalizing her self-worth also made a big difference for "Paula." Today she is the IT manager at an Oregon-based direct marketing company. During the course of more than 20 years in the industry, her jobs have included programmer and manager of a business intelligence team. On average she makes about as much as her male counterparts, but only after realizing that she had sold herself short, she said.

When Paula took her current position, she assumed her company could not afford to pay her more because it was a smaller business, she said. After being on the job for about a year, she learned that she had been performing under pay inequality -- The previous CIO had earned significantly more. Despite having a sub-C-level title, Paula was doing the same work but was earning a lower salary. She put together a case for why she should be paid more and did get a sizeable raise that put her on par with her predecessor.

More from our Women in Tech series

Breaking the glass ceiling in IT

Women CIOs and the art of negotiation

Where women fit in with IT culture

Why aren't women achieving executive careers in IT?

Are booth babes bad for the IT landscape?

"If I had known about the previous CIO sooner, I would have been able to negotiate for a higher salary in the first place, leading back to the thought that we don't ask for enough," Paula said.

Paula is still earning slightly less than the previous CIO, but the gap is now smaller. That works for her for now, because her job satisfaction is high. "I love my job and having a sane place to work is priceless," she said.

Indeed, it's not unusual for job satisfaction to trump the desire for higher salaries. "Cynthia," IT director at a Pennsylvania university, "agrees completely" with the notion that women tend to have lower salary expectations and demands. She views this as unfortunate, but at the same time she is satisfied with what she makes, despite suspecting she may be getting shortchanged.

Cynthia has never needed to negotiate her salary during her 30-year IT career, she said. (Currently it's in the average range of the TechTarget survey's IT leader and CIO salaries). However, with Cynthia's experience, advanced degree and certifications, she ought to be making more, she said. Because of the specialized nature of her job descriptions over the years, however, her position isn't easily categorized, making it difficult to attach it to an industry standard or fight against pay inequality.

"Personally, I have viewed my salary as the secondary salary in our household, and I still feel very blessed to be earning a 'secondary' salary that is more than the combined salary of some households," Cynthia said.

The underestimation of one's worth is not uncommon among working women in general, Hill said. But it is particularly high among better-educated women in what are considered "historically male" industries like science and medicine.

When it comes to CIO salaries and pay inequality, there are no easy answers. "There is a lot of evidence that our biases are simply a part of how we perceive things; we don't hold these stereotypes consciously and somehow that makes them even more dangerous, so we have to pay attention to them," Hill said. "Certainly there have been enormous gains for women in the workplace over the last 50 years, but there are still stereotypes that inform us."

Let us know what you think about the story; email Karen Goulart, features writer.