While they aren’t the best paid among their peers, midmarket senior-level IT executives are some of the most satisfied. Senior IT executives surveyed by SearchCIO.com and SearchCIO-Midmarket.com in 2011 for the annual CIO/IT Strategy Media Group IT salary and career survey indicated that good relationships with the business, challenging projects and the appreciation of bosses and peers are major drivers of true job satisfaction. 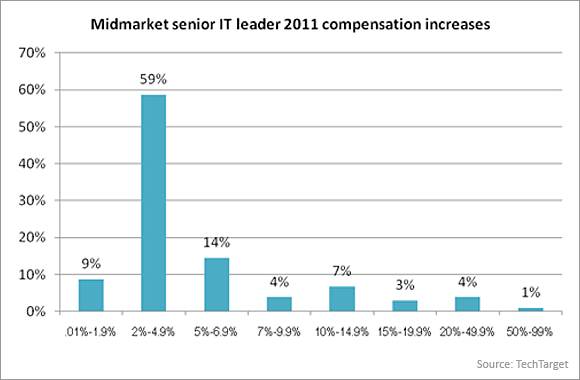 Job satisfaction factors are tied to more than just how much money is earned. Survey numbers showed IT executives at smaller-sized midmarket companies were happier with their compensation than their peers at larger midmarket companies:

On average, midmarket IT professionals responding to this year's survey reported an increase in compensation, but a breakdown of those numbers show it was senior IT executives and IT managers who fared better in 2011 than 2010.

While compensation satisfaction continues to be a divisive subject among midmarket survey respondents, many admit that money isn't a driving force for their overall job satisfaction. Larry Miller earns "just above" the $90,000 total survey average salary as a MIS/IT manager at Exterior Wood, Inc. A former research chemist, Miller took great satisfaction in revamping the lumber and wood product manufacturer's network and hardware.

"I'm paid very well, and I'm very happy," Miller said. "We're relatively small, 265 employee-owners, and we just have a hell of a lot of fun at what we do."

Perks -- such as donating unused sick days or vacation time to fellow employees and being able to send workers to school to learn new technologies -- add to that happiness, as does the freedom of being a self-sustaining IT organization with a seamless relationship with the business, he said.

"I have a C-level position here and I know what's going on, and I'm blessed to have only one boss, the CEO/president," Miller said. "We don't have the horrors of corporate reporting because we're privately held so we get to focus on growing the business, making things work and succeeding and that makes all the difference."

A majority of 2011 midmarket senior IT respondents -- 62% -- reported some level of satisfaction with their compensation: 27% said they were satisfied; 22% were somewhat satisfied; and 13% were extremely satisfied. 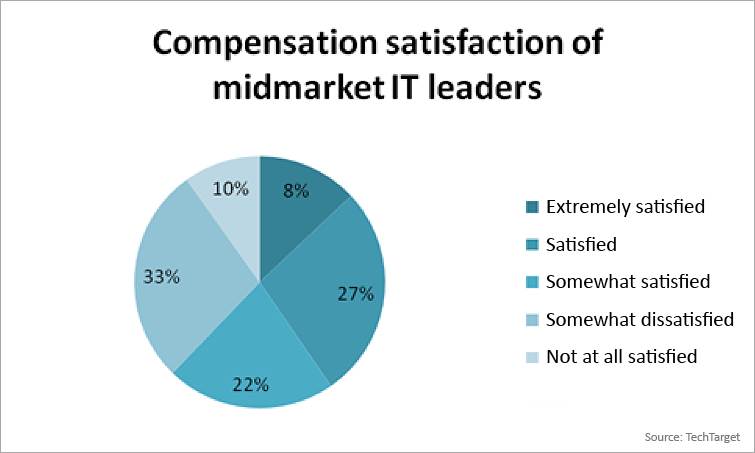 For Jim Beck, director of IT at New Orleans-based law firm Morris Bart LLC, salary is important -- but recognition from management and peers is equally important. Beck said he spends much of his time communicating with the owners and top managers at the firm to make sure technology is in line with business objectives. Having a good staff, he said, frees him somewhat from managing projects and allows him to focus on what's next. Paramount to happiness, however, is the satisfaction of doing the job well, according to Beck.

"It's easy to get caught up in looking at what is wrong in any job; it's also easy to think it will be better elsewhere," Beck said. "The truth is that it is always in your best interest to look at what is good about the job, then look at what you don't like and see how you can fix that or adapt yourself to it."