As in life, when it comes to work, money doesn't always equal happiness. Of course, money doesn't hurt, but for the senior IT executives surveyed by SearchCIO.com in 2011 for its CIO/IT Strategy Media Group IT salary and career survey, other key elements have to be in place to create job satisfaction. The types of projects one works on, the appreciation of bosses and peers, and even the types of industries IT leaders proffer their skills to -- all are crucial to a harmonious work experience. 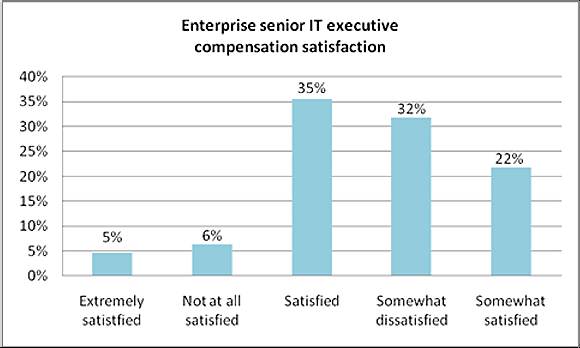 IT executives at companies with 1,000 to 4,999 employees showed the highest level of dissatisfaction with their compensation: 54%; 31% were somewhat dissatisfied and 23% were not satisfied at all. This was the only group in which those unhappy with their pay outnumbered their satisfied peers. And in which industries were to be found those unhappiest with their earnings? The computer and data processing, education, manufacturing and wholesale/retail/trade industries reported the least satisfaction. Respondents in finance, government, media and health industries were at the other end of the spectrum as far as compensation satisfaction. 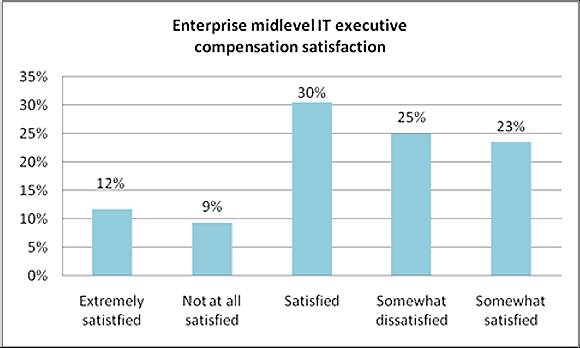 But job satisfaction isn't just about how much money is earned; it's also about the work done to earn one's salary.

Some IT leaders who communicated with SearchCIO.com following the survey said money is actually among their lesser concerns when it comes to happiness. Work that challenges and expands their knowledge of new technologies and a good, symbiotic relationship with the business are among the less tangible elements that make work more of a pleasure. This isn't so surprising, considering that respondents across all job titles in this year's survey reported spending most of their time using technology creatively to achieve business goals and manage projects.

Aniello Salierno, CIO at Charlottesville, N.C.-based Maxwell Group Inc., a company that plans, manages and operates senior living communities in the southeastern U.S., is on the same page as his peers in this regard. Salary is an important part of total job satisfaction, he said, but it doesn't come before how the organization embraces IT and the positive impact IT is able to provide the organization.

"I have spent the majority of my time building a more firm foundation. I prefer being actively involved in the projects that bring efficiencies; but effectively communicating the benefits of new projects is necessary for adoption -- and it's also rewarding," Salierno said. His greatest satisfaction comes from infusing the traditional approach of resident-patient care with technology that actually improves that care, he said.

"Reducing the time and effort it takes our employees to be in compliance with state and federal regulations, and allowing them to focus on resident-patient care continue to make me happiest," Salierno said. As for the part of IT that provides less satisfaction? "I am least excited working with technologies, processes and vendors that hiccup more than is expected -- videoconferences, mobile device management and data backup processes."