Senior and midlevel IT executive salaries were on the decline in 2011, according to new data from the CIO/IT Strategy Media Group IT salary and career survey. Salary averages stayed flat compared to the 2010 survey data, but total compensation (base salary plus bonuses and other incentives) dropped significantly as senior IT executives battled with reductions in benefits, stock options and bonuses. About 94% of all senior IT executives reported earning more than $90,000 in 2011. Their average base salary in 2011 was $144,000, a figure that was greatly affected by whether a respondent reported to the CEO, the CIO or another senior IT executive.

The survey, conducted among readers of SearchCIO.com and SearchCIO-Midmarket.com in November, gathered more than 1,700 responses from IT executives and roles globally across 32 industries. All 50 U.S. states were represented. The survey defined a "senior IT executive" as a respondent having a title of vice president, senior vice president, executive vice president, CIO, chief technology officer, or chief information security officer. It defined as "midlevel IT executives" those who identified themselves as being at the director level.

The overall mood of the 544 survey respondents in senior IT and midlevel IT executive roles is balanced precariously between optimistic and pessimistic as the Great Recession trudges onward. Just 37% of our senior IT executives reported that the mood in their IT organization is optimistic; that number, however, is nearly matched by the 30% of respondents who admitted they were openly pessimistic.

IT salaries and compensation in 2011 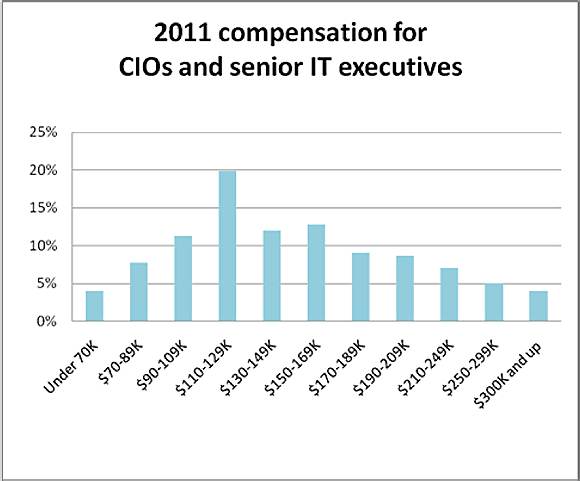 Across all sizes of organizations, total 2011 compensation for an average senior or midlevel IT executive was $157,482, a slight ($3,000) decline compared to last year. In enterprise organizations, senior and midlevel IT executives reported an average 11% higher compensation than their midmarket and small-business counterparts ($174,432 per year).

How much should a CIO receive as an annual compensation package? There seems to be a vast divide between perception and reality. "CIO salaries vary by industry, as well as the size of the company. I would say, for smaller companies the "right" salary would be in the $150,000 to $250,000 range, and for larger companies, $300,000 and up, said Craig Schwartz, senior engagement director at Freeborders Inc., a San Francisco-based technology and outsourcing consulting firm.

"As most CIOs are direct reports to the CEO or have a seat at the executive table, the salary and compensation needs to be in line with [that of] the business line leaders reporting at that level, as the position requires not only a grounding in technology but also an understanding of the business goals and how to optimize business need and goals with technology as an underlying force," said Daniel M. Ryan, CIO for the city of Battle Creek, Mich.

Average 2011 IT salaries by position

According to our CIO/IT Strategy Media Group IT salary and career survey, these are the average base salaries by position, as reported by respondents in the United States:

A large segment of our survey respondents, however, did report receiving a base salary increase or a bump in total compensation.

How long can the IT industry sustain these compensation levels without the IT talent pool being affected? It remains to be seen, but the changes have not gone unnoticed by senior IT executives. "The state of North Carolina hasn't granted any salary increases in three years. Our benefits cost more and deliver less. I am not sure what legislators expect, but they are setting up every state agency for a mass exodus as soon as the economy improves," said Joel Sweatte, director of IT at East Carolina University in Greenville, N.C.

The mass exodus that Sweatte predicts could be under way already. The biggest reason that senior IT executives quit their jobs is to chase more money, according to our survey respondents. Almost half (45%) of all senior IT executives and midlevel IT executives who took on new roles in 2011 did so in pursuit of a higher level of compensation. Changes in an organization's structure also played a large part in job churn, with 15% being eliminated in a merger or acquisition, another 3% being affected by layoffs and a small slice (1%) unhappy with a change in their own superiors. The most common response interviewees give when they're asked why they want to change jobs -- that they desire a new challenge -- had a small showing of respondents (12%), and unspecific "job discontent" (9%) also played a part in churn.

"I doubt that anybody would honestly say they make too much," quipped a vice president of IT for an aerospace and defense organization in northern Texas. "[It's] probably a lot of flat salary and incentive issues, just like mine. If there are companies ready to take off once the economy picks up, I am sure the demand will go up until there is some equilibrium." 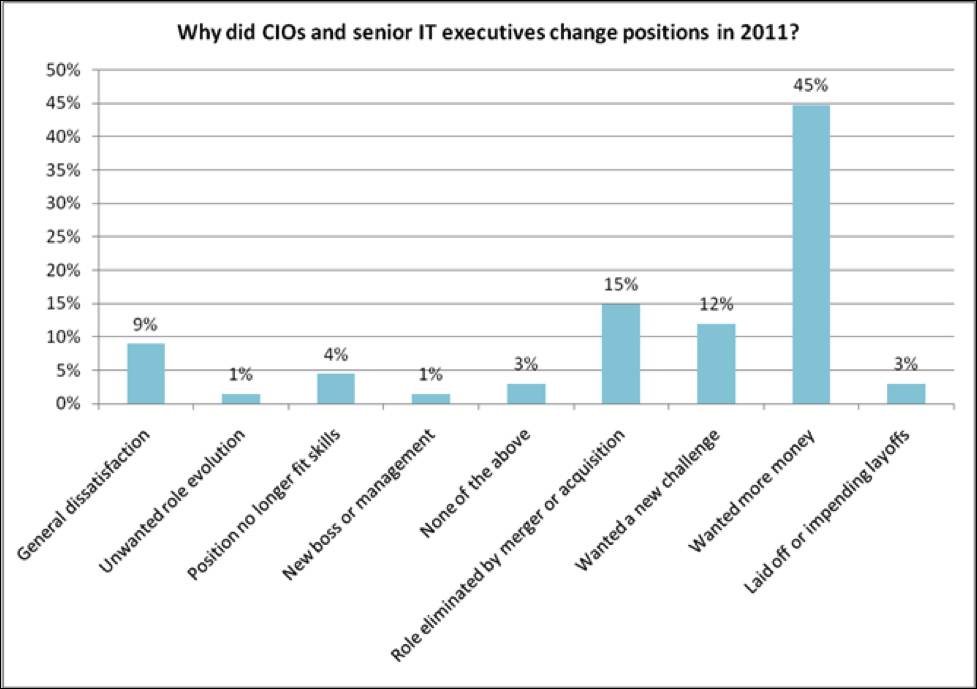 And a senior IT director at a messaging company in New Jersey said this: "It doesn't surprise me. Based on the loss of about seven talented employees over the last four months, I would say that is true. Salaries were frozen and/or cut since the economic downturn in 2008 and 2009. CIOs and senior execs lost their bonuses, stock compensations and even matching-employer 401(k) compensation, while their responsibilities increased since there were so many layoffs around them forcing them to have more responsibilities for the same compensation."

While it could be a sign of the recession, this migration may simply be a facet of employment that we should expect regardless of the state of the economy. "Most of us are in the 'less than perfectly satisfied with our current level of compensation' category. I think it's human nature to always strive for a little more compensation," said Jaime Manriquez, senior vice president and CIO at Santa Cruz County Bank in California. "I learned early on in my career that money does not always equal happiness or career satisfaction." Compensation satisfaction is a large predictor of career movement, but CIOs are adamant that other aspects of their job play a huge part in their career happiness as well. "My level of job satisfaction is not very much about what's on the paycheck," said Jim Madaris, vice president for corporate project governance at Alfa Mutual Insurance Co. in Montgomery, Ala. "The environmental factors are what it's about with me. Openness to change, allowing executives to set and execute strategies, driving out politics with a data-based decision-making culture … those are the things that make a great quality of life for a senior leader."

Ian Fleming, a CIO in Arizona, confirms Madaris' feelings that CIO salaries are not the most important element of job satisfaction. "My drive comes from having a sense of transcendent purpose. When my team and I are able to accomplish what others only read about, when others listen intently when we are asked to speak at national industry conferences, or when we are able to cut operational costs due to the deployment of a technology we support -- this is where I get my drive."

Let us know what you think about the story; email Wendy Schuchart, Site Editor.