In 2012, with budgets under pressure and economic prospects for their companies sketchy, CIOs face the challenge of how best to allocate dollars to meet business needs. In November, TechTarget asked 2,642 IT professionals and business analysts around the world which of 66 IT projects they would invest in during the coming year.

The results might surprise those who believe IT is getting out of the infrastructure business, but they closely matched IT priorities we have tracked over recent years. Here are the projects that more than 50% of CIOs said they were investing in (last year's rank is given in parentheses):

The emphasis on server virtualization for several years running now is being driven partly by another feature of recent years -- data center consolidation. Globally, 38% will take that on in 2012. In North America, the number is down to 30%, probably because consolidation has been going on there for more than five years. Server virtualization is being adopted by 67% of those consolidating, far ahead of such techniques as integrated infrastructure (26%), hosted servers (30%), integrated infrastructure (26%) or cloud (25%).

Cloud computing has risen from last year's 22%, but that's actually not outside the survey's 2.5% margin of error. More interesting is where the interest in cloud lies at the moment: mostly in Software as a Service (SaaS). Of those adopting cloud in any form, 55% are implementing SaaS in 2012, far ahead of the next priority, Storage as a Service, at 35%. In fact, SaaS adopters say that 57% of their end-user population will be using one or more cloud apps next year.

Predictions that cloud computing soon will replace data centers are premature, however. In North America, among the 30% who are putting storage into the cloud in 2012, about 30% of their storage capacity will be there. Among the 31% deploying server infrastructure in the cloud, average capacity for 2012 will be only 20%. While conventional wisdom is that a private cloud is the way companies are going for the moment, only 18% are embarking on that in 2012.

Some other media and industry cloud darlings that didn't fare so well in 2012 adoption plans are online productivity apps (10%) and hosted or cloud email (6%).

Managed service providers (49%) and SaaS vendors (44%) will be the favored recipients of cloud dollars in 2012, respondents say. Less established vendors still face an uphill battle, and potential customers overwhelmingly cite security, data protection and reliability as their top three concerns. That's not surprising, given the overall emphasis in IT on a cluster of related issues: security, data protection, disaster recovery and compliance.

Looking at the entire application deployment picture, 66% of North American respondents said they would deploy apps with on-premises software and hardware in 2012, followed by 33% SaaS, 29% a private cloud with on-premises software, 22% appliances and 17% mobile. Platform as a Service and a private cloud with a company's own software each rated 14%.

All these models will be used for packaged applications, but custom development remains an important route to delivering applications, with 34% going that way in 2012, compared to 19% using packaged apps. The standard kinds of applications that companies will deploy in 2012 are typical, with ERP, finance, customer relationship management and human resources topping the list of functional areas. The top app, however, was business intelligence -- 43% will deploy it in 2012. 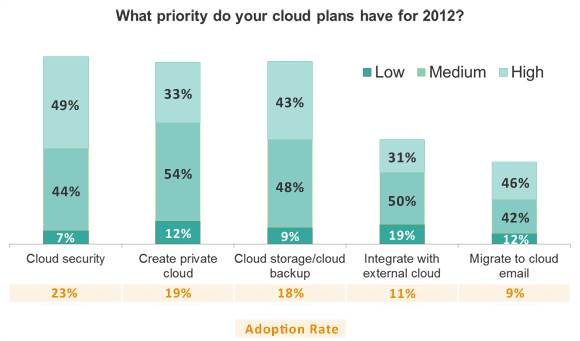 Dig Deeper on IT spending and budgeting