MIT Technology Review’s annual list of Innovators Under 35 recognizes individuals who are tackling hard problems and making notable advances in the areas of AI, virtual reality, robotics and security. This year’s list included Ian Goodfellow, the inventor of generative adversarial networks, and Franziska Roesner, who focuses on augmented reality (AR) security. Recipients are given an opportunity to make a short presentation of their work at Tech Review’s annual EmTech conference in Cambridge, Mass. And here’s what Goodfellow and Roesner — whose research was selected here for their enterprise applicability — had to say.

One pain point for machine learning is the man hours it takes to label training data. “At Street View in 2013, we built the first system that was able to read with super human accuracy,” said Ian Goodfellow, staff research scientist at Google Brain, the search engine’s deep learning research project. “And we did that using a database of over 10 million labeled photos.” 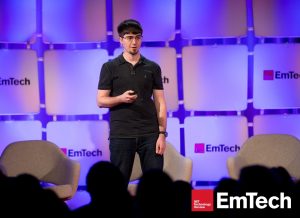 Ian Goodfellow on stage at EmTech

In 2014, Goodfellow set out to make this process more efficient. Instead of relying on traditional model optimization to minimize the difference between what a model predicts and what a human says a model should predict, Goodfellow opted for game theory. He calls the technique generative adversarial networks (GANs), and it’s creating a lot of buzz in AI circles.

The neural networks teach each other without the use of labeled data, and the results so far are promising. GANs that used 100 images of digits achieved the same level of accuracy as traditional models trained on 60,000 images just a few years before.

The benefits of AR tech are easy to dream up: They can overlay instructions on how to fix a sink, provide digitally generated directions onto physical roads, and act as a guide when cooking dinner.

“But there’s also a potential dark side,” said Franziska Roesner, assistant professor of computer science and engineering at the University of Washington. What happens, she asked, when a user accidentally installs a malicious app that can deliberately distract or even obscure objects from sight? Or when users learn that their AR apps or platforms are recording and analyzing their every move? 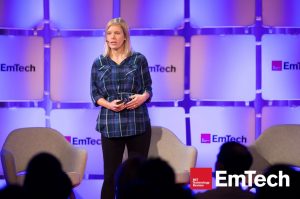 Franziska Roesner on stage at EmTech

Her research is only the beginning, but paying attention to these vulnerabilities while the technology is still not widely deployed is critical, Roesner argues. “My work lays the foundation to enable these technologies to reach their full potential, unhampered by security, privacy and safety risks,” she said.