Company leadership has a vision for where the business should be headed. The new direction diverges from what made the company successful. It will require new business models, new financial models, a new business psychology — it calls for innovation. How does leadership make it happen?

Don’t overlook innovation software, said Mohan Nair, who spoke to me recently about his experience with Spigit software. “You can’t do it the old-fashioned way.”

Nair is the chief innovation officer and a senior VP at Cambia Health Solutions, a Portland, Ore., not-for-profit that got its start nearly a century ago selling insurance to loggers and mill workers in the Pacific Northwest. In recent years, Cambia has moved beyond insurance into consumer healthcare and technology. Today, the health insurer, which has 2.5 million members and employs 5,500 people, comprises some 25 companies, many of them aimed at helping people become more involved in their healthcare decisions through online, mobile and digital technologies.

Nair, who was trained as a computer scientist and went on to run software companies, was recruited in 2003 to Cambia, then known as The Regence Group, to help the company’s then-new CEO, Mark Ganz, engineer a “total transformation of the business from the bottom up, not top down.”

The bottom-up transformation started at the top with the CEO’s vision to make Cambia a more customer-centric company — a radical viewpoint in the health insurance industry at the time, Nair said — and with leadership’s conviction that innovation be seen as a company value.

“You don’t say, ‘Let’s have a lab and you guys are going to get all this innovation after the smart people think it through. You make innovation a responsibility and a requirement.”

But saying that henceforth innovation is a company value doesn’t make it so. “It’s not that easy,” Nair said. It’s important that innovation is not something seen as “allowed” by the company. “That’s not what innovation is about. There is a renegade quality to innovation and you should unleash it, not allow it.”

One thing that helped unleash new ideas at Cambia, Nair said, is the innovation software from Spigit he introduced five years ago.

“It allows for true bottom-up crowdsourcing in a somewhat disorganized way. Anybody at any level can say, ‘I challenge us to solve this problem. I challenge us to identify solutions in this area,'” he said. “Technology has no emotion, but the design of the technology can allow emotion to manifest itself.”

While Cambia’s organizational structure — who reports to whom, the various paths up the corporate ladder — is the “backbone of the company,” Spigit’s innovation software “is like the nervous system of the organization,” Nair said.

“It’s all about how ideas flow from one part to another, where redundancy could be good and where focus can be the enemy of new ideas,” he said.

Measure — but not too soon

It’s also important that innovation be measured. To that end, Cambia employees are surveyed quarterly on their bosses’ ability to “absorb and understand” new ideas. The company also measures how many ideas are coming through the system, identifying which people are getting more ideas going than others and what techniques they are using to make that happen, Nair said. The company has also found a correlation between people who submit ideas and their performance rating — people with high performance ratings tend to contribute more ideas than their lower-performing peers.

But, he cautioned against imposing metrics too early in the process. “I never put those measurements in place until I felt we had reached a tipping point, which is about 28% of the company submitting, viewing or contributing new ideas,” he said.

While the aim of the innovation software is to generate ideas that bring business value, companies should not fixate on business results too early, he said. “When we were at 5%, 8%, 10% participation it was about loving the idea less and encouraging the people with the ideas more.”

Indeed, it takes about four or five years for the technology-enabled innovation model to “mature,” Nair said, who rattled off Cambia’s latest 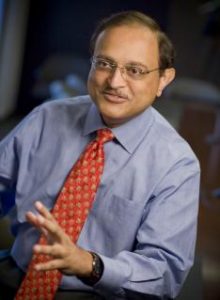 “The most recent company we are about to launch will be a very dramatic transformation. It is in the area of pharmacy transparency and came from a pharmacist who submitted his idea into the crowdsourcing toolkit,” Nair said. “Others latched on it — and eight months later he is founder of a company.”