During his keynote talk, Nigel Travis, CEO at Dunkin’ Brands Group Inc., provided a handful of leadership tips to the CIOs and senior IT leaders who attended the recent SIM Boston Technology Leadership Summit. Here’s one: When CIOs get a seat at the leadership table, he said, “be strategic, not technical.”

His advice comes from years of working in customer-facing organizations from likes of Blockbuster, where he learned the value of customer data, to Papa John’s, where he served as CEO and president and helped build the company’s online ordering sales from 6% to 30% in four years, to Burger King, which included a brief stint in IT.

Some of his most detailed leadership tips focused on how to manage teams effectively, what he called his “tenets for success.” 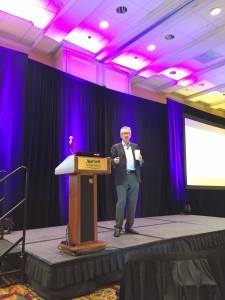