A growing number of small businesses are switching over to cloud systems, particularly for data storage, file sharing and email, a recent survey of 300 small-business owners found. Their top reasons for migration: a more mobile and productive workforce and easier data access. The survey also found that respondents who had a high grasp of cloud technology were more concerned about functionality than security.

According to The Alternative Board’s June 2015 Small Business Pulse Survey, 87% of the business owners the advisory board company surveyed said they migrated their IT systems to the cloud in the past five years. A good chunk of these owners (41%) considered their grasp of cloud technology above average (8, on a scale of 1 to 10, with a mean of 6.1). Those surveyed said their main motivations for moving IT to the cloud were making their workforce more mobile and productive (22%), and providing their employees with quicker and easier access to data (21%). Interestingly, only 8% of respondents looked to cloud platforms for cost savings, and 10% moved to cloud to reduce risk. 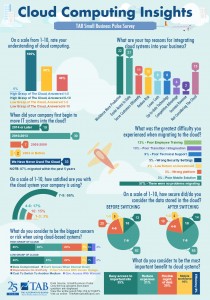 The survey also found that migrating to cloud systems went fairly well on average for the majority of organizations, with 57% saying they had no problems.

While security was unsurprisingly a primary concern, the business owners weren’t overwhelmingly worried about it, said the survey report’s authors. Eighty percent of respondents with a high grasp of cloud ranked their confidence in security a 7 or higher out of 10; only 7% rated their cloud security confidence at 5 or lower.

According to David Scarola, vice president of The Alternative Board, these findings indicate that small businesses are less worried about data breaches and more about finding efficient services that will drive functionality, mobility and productivity. “Those that have made the transition to cloud systems have quite a bit of confidence in the security of these systems. The cloud-based system providers have done a good job providing secure and reliable systems that is leading to increased confidence,” he told me in an email.

Daniel Mellen, a senior manager at a management consulting services company who has expertise in information security, agreed that one reason small businesses, and businesses in general, are less concerned about the cloud’s security and more about its functionality is that the security of cloud services is improving, he told me on Twitter.

“Everyone is focusing on security, and it’s improving. CSPs [cloud service providers] are getting better. [There are] more third-party products [and] better integrations. All of this increases confidence and trust in cloud services — SMB or big enterprise alike,” he said.

Chad Cardenas, the president and CIO of a cloud services provider, concurred that he’s seeing more SMBs drawn to the cloud because of its security benefits (saying that more than 90% have reported security satisfaction post-migration). But even more important, he argues, is looking at the mindset of the CIO or IT leader making decisions around cloud migration: Are they basing their decisions on what’s differentiating their company in the market or what data and systems they consider mission-critical?

“CIO’s who can answer how [and] when to invest internally versus [when to] outsource or partner are in a better position to be transformational leaders,” he told me over Twitter.