Having to go to San Diego for work doesn’t strike many people as much of a chore. “Oh, lucky you!” they say. “You have to go to the beach.” Others shout out a list of attractions: “The U.S.S. Midway! Balboa Park! The zoo!” 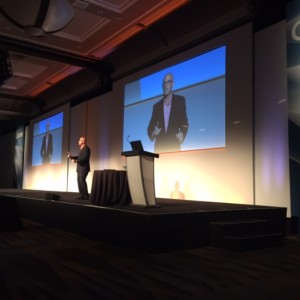 I didn’t get to see any of those hotspots on my two and a half days there. I saw the inside of the cavernous Manchester Grand Hyatt, which hosted the annual Gartner Catalyst Conference for IT professionals. It was a great event. I talked to dozens of smart people, went to technology sessions packed with useful information and dashed off a story about the opening keynote speech in my hotel room, which had a stunning view of the bay. Again, great, but no walk on the beach.

So at the end of my last day in that sunny metropolis, I was looking forward to a talk by communications expert Mark Jeffries. He had been a stockbroker and TV host and now gives presentations all over the world, tempering tips about being a good listener with jokes and campy impressions. Best of all, his talk promised to be light fare. “I’m honored to be your Catalyst afternoon speaker,” Jeffries said in a bright English accent, “the speaker that leads up to alcohol — that’s always a good thing.”

But diverting as it was — and despite my being off-duty — I found myself taking notes. It was pure gold for CIOs. In a lively, one-hour talk, he walked a ballroom full of IT people through the mechanics of networking and influencing others. My co-worker, Nicole Laskowski, wrote in her column about three truths about communicating — assumptions, Jeffries called them — that double as tips. The first one: No matter what your job is, you’re a salesperson. People are looking at you all the time, judging you — and deciding whether to buy.

“You’re judging me right now. I’m also judging you,” he said. “Right now I quite like what I see — primarily because I’m being paid to be here.” Raucous laughter followed.

Jeffries does that a lot. He puts a twist on an old standby — sell yourself — and then puts everyone in stitches. He also laces his speech with rhetorical devices such as the “rule of threes,” which holds that three is just the right number of proofs people need to be convinced. Jeffries let the audience in on the secret, using snippets of President Barack Obama’s speeches as examples — “We’ll reach for it, we’ll work for it, we’ll fight for it.”

It worked. The audience was rapt as he ticked off a list of steps detailing effective communication: LWAR, which stands for listen, watch, anticipate and respond. Note the triplicate: “By respond I mean pick up the phone, create the email message, send the instant text message — that’s the respond, the beginning of communication.”

But people get the order wrong, he said. “We’re so focused and determined to tell people our story, about what our idea is, we speak first … and we shouldn’t.”

He used a scenario that happens to so many: forgetting a person’s name immediately after it’s been given.

Jeffries asked an attendee in the front row to stand, turn toward the audience and say his name. It was Dave. “Now If I said to you [that] at the end of this speech I will give you $10,000 if you can remember Dave’s name, guess what?” Jeffries asked. “You’d all remember his name, because you want that 10 grand. You’re going to turn the listening on.”

Next came W, watch. When someone speaks, Jeffries said, that’s not the whole message. People transmit a lot about what they’re thinking at the moment through body gestures and movements. One way to tell whether the person you’re talking with is engaged is a metric called NPM, or nods per minute. When you’re talking and your partner is nodding, that’s good.

“If the nodding stops and it’s replaced by a kind of glassy-eyed horse stare, something’s gone wrong,” he said to more yuks. “If you see the nodding stop, change topic, let them ask questions.”

A, for anticipate, Jeffries said, is about putting yourself in other people’s shoes — something IT needs to pay careful attention to. “We have got to stop thinking about what [IT’s] priorities are, within the team, within the operation, within the function,” he said, relying again on repetition. Instead, IT folks need to think about the business and speak the business language.

“You have to know exactly what the objectives of the business are. And you translate what you do into their language and suddenly you’ve anticipated their needs.”

To borrow a line from Jeffries, see what I did there?

Let me know what you think of the post; email me at [email protected], or find me on Twitter @jmsparapani.