Most midmarket IT executives don’t see themselves job hunting anytime in the near future. According to a CIO survey conducted this past November, 28% of senior IT executives said they’re satisfied with their current jobs and companies and plan to stay in their positions for the foreseeable future. In addition, 42% of those surveyed replied that they’re open to new job opportunities but aren’t actively seeking new positions. Only 13% of midmarket senior IT executives reported that they’re actively looking for new positions for 2012, according to the same CIO survey.

Despite a difficult job, a total of 70% of those surveyed reported that they aren’t seeking new positions or jobs for 2012. A mere 2% said they’re eyeing internal moves, and 15% reported that they’re keeping their eyes open for when the economy picks up. 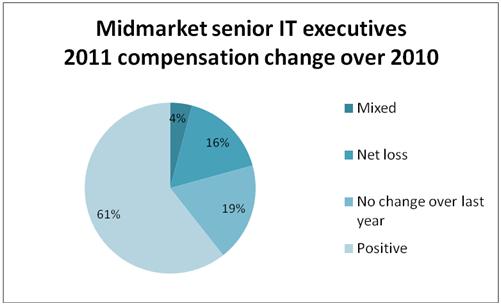 The fact that senior IT executives aren’t searching elsewhere for jobs means that their organization is keeping them satisfied a number of ways — monetary and otherwise. As with all employees, job and salary satisfaction is critical if you want them to stay put, and as of now, it seems as though most midmarket senior IT executives are satisfied enough at their current jobs to continue through 2012.

Sarah Blanchette is a journalism student interning as an editorial assistant at TechTarget.